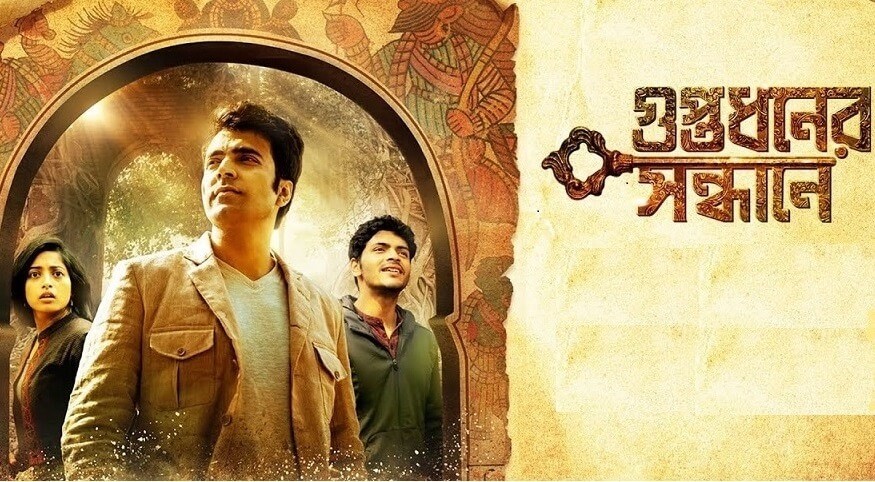 Subarna Sen, an Oxford University professor, travels to India after the death of his maternal uncle. He learns that his uncle’s palace has a hidden treasure and decides to find it.

Based heavily on Satyajit Ray’s Feluda story and the adventures of Indiana Jones, Dhrubo Banerjee’s new treasure-hunting adventure film has all the ingredients needed to delight audiences. Banerjee knows the psyche of his audience like the back of his hand, capitalizing on their likes and dislikes to give him a jet coaster ride of pure fun instead of pretending to be intelligent. Banerjee’s main character is a half Feluda and half Indiana-Jones-like character named Subarna Sen (affectionately called him Sona Da), a professor of history at Oxford University. When he returns to India, Sona meets his nephew Da Abir. Abeer takes Sona Dha to his ancestral home in the village of Manikantapur.

There, Abeer’s eccentric but learned maternal uncle (Gautam Ghoth, in a neat little cameo) has recently died under mysterious circumstances. Once in the village, Sona Dha and Abir learn of a rural lore that tells of a 350-year-old Mughal treasure hidden somewhere in the ancestral palace where the zamindars of old lived. Abeer’s eccentric maternal uncle was the last of the Zamindar dynasty and left clues in her diary to help Abeer find the treasure. With the help of Sona Da’s sharp mind, clumsy Avil and his lover, the beautiful Jinuk, search for hidden treasures in a dangerous and dangerous search for hidden treasures as local thugs, descendants of Zamindar pastors, compete against them. Embark on a quest. to the goal.

Treasure hunting is like a seasonal flavor. A believable cast, a well-crafted storyline and a young director form the common elements of his two newly released films Guptodhoner Sandhane and Alinagarer Golokdhadha. But the striking similarities between the two films don’t stop there. Both films involve characters in treasure hunts and puzzle solving from location to location.

Both share a puzzling structure of events followed by a quest to solve the mystery. Both are full of literary and historical allusions. For all its charm, his Guptodhoner Sandhane is definitely a film not to be missed.
The treasure hunt begins when Abeer (Arjun Chakraborty) and his Sonada (Subarna Sen, Abeer Chatterjee) – an Oxford history professor – arrive at Abeer’s maternal uncle’s house in Manikantpur.

Harinarayan Singha Roy (Goutam Ghose) – his Abir’s maternal uncle who died suddenly after suffering a cardiac arrest – was obsessed with puzzles. As a bona fide Detective Bonn, Abil embarks on a treasure hunt as Sonada. This movie is full of interesting puzzles and impeccable humor. Funny puns like panto bhut, panta bhaat and trekking trick truck will keep you glued to your screen. There’s plenty of room for thriller spookiness. The scene where a strange creature descends the stairs gives me goosebumps.

With good background music, the script is really the hero of the movie. However, Guptadhaner Sandhane’s biggest advantage is Arjun as a screen abeer. His impeccable comic timing is to be commended. His character represents a typical Bengali boy with wit, humor and good appetite. Meanwhile, the real Abeer is on the verge of becoming a must-have Bengali detective.

Smart and knowledgeable, he uses his Bangaliana to once again prove himself a homicide detective on screen. Ishaa as Jhinuk does the characters justice, while Rajatava Dutta as Dasanan Daw and Goutam Ghose as Harinarayan are a feast for the eyes. In a small role, Ujan Chatterjee sets the accent as his Nilu.

Perhaps the film’s weakest link is its script. It’s too easy and somewhat predictable. The villain is clear, and so is the climax. But this movie gives us what we crave: intelligent storytelling. With his comical timing, thrills and wit, Guptodhoner Sandhane is hard to miss.